How Important Is Compassion In The Workplace? 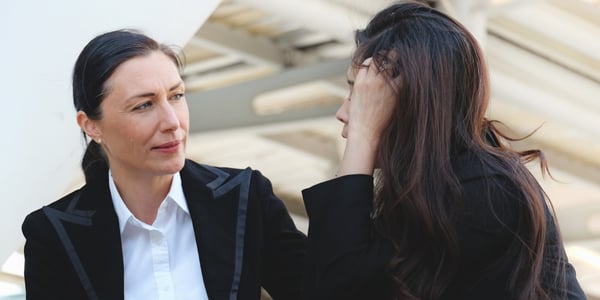 When I was 26 years old and in my first real management position, I realized it would be helpful to read a book on compassion. I didn’t even really know what compassion was, but I knew that I wasn’t using it as a manager. The problem was, I couldn’t find much on the subject in the context of the workplace. Most of the writing had to do with compassion as a spiritual practice, or practicing benevolence in what I would call the “woo woo” world.

So I eventually decided it wasn’t important to work on this particular thing. Better to learn the practical stuff, like creating a job description, hiring, firing and giving feedback. And that’s where I left it.

Today, as a leader of a company some years later, I get to wrestle with compassion at work again. What is it? Is it necessary at work? What does it make possible?

I thought it would be good to simply know the definition of compassion. It’s both an understanding of another’s pain and a desire to somehow mitigate that pain. Then, I had to look up empathy — because I suddenly realized I wasn’t clear on the difference between the two. I learned that empathy refers to the ability to relate to another person’s pain vicariously, as if one has experienced that pain themselves.

I’d heard about a Seattle-based wealth management firm called Brighton Jones that had named a “Director of Compassion.” The Brighton Jones team call themselves a “wealth well-being firm,” and they’ve won numerous awards for their company culture. Clearly, they have something we can all learn from. When Cory Custer took on the role of Director of Compassion, his new title created a lot of buzz on LinkedIn. People wanted to know more about what was going on over there. So did I.

To answer those questions, Brighton Jones hosted a “happy hour” for people in the Seattle area to get together and talk about compassion and leadership. 40 people showed up for the first conversation. The next year, it grew to a 100-person event. This year, 400 people signed up to attend the “The Compassionate Leader Summit” in November and tickets eventually sold out.

So: Does this matter at work?

I recently had the chance to talk to Brighton Jones’ Bonnie Gerlaugh, who co-leads their Mindfulness-Based Emotional and Social Intelligence (MESI) program. I asked her if I could interview her about this compassion at work thing. She’s also part of the organizing team for their now annual Compassionate Leader Summit. Here’s what she shared with me.

Dede Henley: Tell me about how you think about compassion and leadership.

Bonnie Gerlaugh: We don’t focus on defining compassion and leadership; instead, we focus on the how. In the Compassionate Leader Summit, we ask the question, “How might we leverage the practices of human compassion and mindfulness to create happier and healthier workplaces?” It’s all about the tools and modalities to bring healthier workplaces forth. We don’t want to create a box by defining either of those terms.

DH: It’s amazing how much the concept has resonated — even just the idea of naming a Director of Compassion. You could see it right away with all the buzz it created on LinkedIn.

BG: The reason why this resonates and why the Summit is part of a movement is that human beings want to rationalize things with clear next steps — and that rationalization feeds habits of disconnection. We stay in our minds in a way that does not decrease suffering. I care about decreasing suffering. What I mean by “suffering” is anxiety, depression, burnout, the need to control and other toxic ways we show up at work.

The work cultures that tend to be less healthy often are fueled by fear. We want to increase connection and a sense of calm and belonging.

DH: When did Brighton Jones begin to focus on compassion at work?

DH: Tell me about a future of work that you can imagine that is guided by compassion. What does that look like?

There is no such things as work/life balance. What we’re going for is work-life flow.

DH: You’ve mentioned a couple of times a phrase, “being above the line.” What does that mean?

BG: In our MESI program, we think of above the line as being self-aware, empathetic, engaging self-management, being curious, having a growth-mindset, etc. Being below the line is what we’re all used to — fear, anxiety, defensiveness, criticism, lack of awareness, caught in your story. Obviously, being above the line allows everyone at work to be in a better place.

For me, that visual really hits home in demonstrating why compassion matters at work. I know I want to be “above the line” and experience all those things that come with it, and I want that for my team, too.

What will you do to lead with compassion and ignite the empathy and curiosity in your organization?