This NFL Coach Delivers Inspiration For Every Team 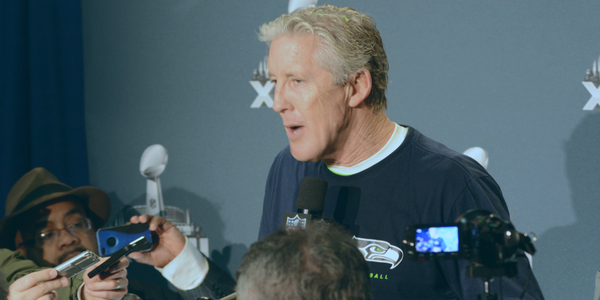 Previously published on ForbesPete Carroll has been the Seattle Seahawks’ most successful coach of all time. He led the team to its first Super Bowl win in franchise history and has created a unique, kick-ass culture. But Pete is not a scream-from-the-sidelines, fight-with-the-officials, throw-big-tantrums kind of coach that many associate with the position. He’s a player’s coach, and he helps his players reach their personal best by supporting them on their own terms. Pete has done this better than any NFL coach of his generation.

Pete is doing a bunch of things differently than other NFL coaches — helping his athletes become better humans, celebrating their uniqueness and helping them get clear about a vision for their careers.

It’s also worth noting that at age 69, Pete coaches millennials — the generation that so many older leaders have struggled with, often judging them as entitled and demanding. But Pete doesn’t see it that way at all.

Well, there’s a new way to think about those pesky millennials!

Pete also knows that millennials don’t react well to the scare tactics so often deployed in football by more authoritarian and controlling coaches. So, he doesn’t yell and scream. Instead, he motivates his team through connection, persuasion and inspiration.

Pete calls his team a relationship-based organization. Strong, trusting relationships on a team always add up to something remarkable. And they allow people to do the best work of their lives.

Apparently, others want to know what Pete’s team-building secret sauce is. Michael Gervais, Pete’s business partner, is the mindset guru for the Seahawks. Pete and Michael built a leadership course called “Compete to Create” and have been delivering it to leaders all over the country these past few years.

Here are three leadership practices, based on the Pete model of success:

Pete insists that coaching should be about something bigger than helping people through the wins and the losses. Specifically, it should be about helping people be better at life. In other words, it’s not all about work. He provides his team with mindfulness and meditation training, strengthening presence both on and off the field. And he models encouragement, positivity and friendliness. These skills help his athletes navigate the complexities of life with more grace. He also makes time to listen and get to know the personal stories of each player on his team.

2.     Celebrate Each Person on Your Team

Coach Pete advises leaders to “celebrate individuality, the uniqueness that each person brings with him or her, and let that energy fill your culture.” This is a wonderful challenge for leaders who may have thought it was more expedient to deliver one-size-fits-all recognition programs and disciplinary feedback. Yes, it will take you more time to really get connected to your team, to know each person as a unique individual. And it’s also so worth the time and energy. Your team will feel like they belong, and they will work hard for you.

In that Seattle Times interview, Pete noted, “It’s really a simple thought, by loving and caring for the people you have around you everything about your environment is going to improve. You’re going to have more fun, you’re going to enjoy it more, it’s going to be richer.”

And the team is going to notice it, too. As veteran ESPN football writer Terry Blount shared, “I’ve never seen a coach that players loved so much. These guys love Pete because he lets them be themselves. He gets criticized for being too freewheeling and easy, but the fact is the players are really engaged and committed.”

3.     Help Your Team Get Clear About their Personal and Collective Purpose

Pete believes that articulating your own purpose can help break down the divisions that are wreaking havoc in our society right now.

“You can’t worry about the other people,’’ he told Larry Stone. “You can be concerned about developing your own position and mentality and philosophy and approach. More people have to be centered in what’s really the truth to them. There’s still going to be divisions. There are people firmly cemented in being a white supremacist, and they think that’s the world for them and that’s how they’re going to live it. There’s going to be division. Hopefully through the course of time, we come together. I think there’s nothing like the power of leadership to help us do that.”

Everyone wants to be part of a winning team. We want the glory of doing something good together. Learning how to be a leader of a kick-ass team takes time. The effort is so worth it.