Unhappy Team? Here's How To Turn It Around 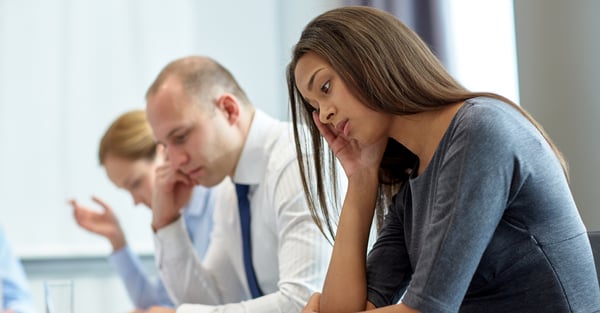 It starts as a pit in your stomach on Sunday evening. It continues as you linger in the office break room on Monday morning to avoid the unavoidable. It drags out into that first frustrating meeting of the week with your eye on the clock; sideways glances confirm others are starting to feel the same way. As a team member, you have slipped into that grey zone of unhappiness. It seems there is no way to climb back out, and it’s also contagious.

As a leader, it’s up to you to fix things. Do you know how to hit the reset button? And are you even aware that there needs to be a reset?

Stress is One Factor of Unhappiness

Low job satisfaction and stress on a team leads to people calling in sick and even leaving the team or workplace in defiance, all of which creates an unhappy work environment for everybody. Happiness researcher, Annie McKee offers, “What we know now is that stress kills health, well-being and happiness at work. And when we are unhappy at work, we often become disengaged, cynical, and toxic to others.”

The cost of stress is high. The American Psychological Association estimates that more than $500 billion a year is lost because of workplace stress. We also know that 550 million workdays are lost each year due to stress on the job and 60% of workplace accidents are attributed to it.

Stress impacts loyalty which impacts the bottom line. Research shows workplace stress leads to an increase of almost 50% in voluntary turnover. People go looking for another job, turn down promotions (because they don’t want more stress) or they resign. And we know how expensive turnover is: The costs of recruiting, training, lowered productivity and lost expertise are significant. The Center for American Progress estimates that replacing a single employee costs approximately 20% of that employee’s salary.

In some cases, unhappiness leads to low morale and deep distrust among co-workers. That can even cost people their lives, as it did on the guided-missile destroyer Fitzgerald in 2017. The command climate survey found “continued and significant issues with communication throughout the command, concerns for stress being levied on the crew, and significant concerns for the leadership and effectiveness of the Command Master Chief.” But the team leaders didn’t do anything with this information to help the ship’s team move out of the grey zone of unhappiness. On a fateful night in June 2017, a Philippine ship crashed into the side of the Fitzgerald killing seven navy seamen and leaving the captain of the ship with a severe traumatic brain injury.

This is an extreme example of the high cost of team member unhappiness, but unhappiness harms organizations and workplaces in numerous everyday ways.

Disengagement Means That Your People May Be Unhappy

Consider the recent data on employee disengagement. In studies by the Queens School of Business and the Gallup Organization, we find that disengaged workers had 37% higher absenteeism, 49% more accidents, and 60% more errors and defects. In organizations with low employee engagement scores, they experienced 18% lower productivity, 16% lower profitability, 37% lower job growth, and 65% lower share price over time.

If a product defect was affecting your profitability and share price, you wouldn’t just stand by and eat those costs. You’d do something about it. Well, unhappy people at work are costing you real money. It’s time to take action.

If you’re not sure where to start, consider hitting the “reset” button, and look to see how you may be part of the problem. Resetting means interrupting some of the unproductive ways you interact with people at work. Resetting may mean paying attention to the impact you have on your team members. We think of this as the “wake” you create.

Recently, I had a coaching conversation with a team leader who’d been frustrated and impatient with his team. He told me he had charged them with solving a particular issue four months earlier. But when he sat in on a meeting last week, it seemed they hadn’t made much progress at all. Frustrated, he stood up and loudly asked what the hell they had been working on and then walked out. Daniel Goleman calls this low emotional self-regulation. Put simply, he lost his cool. And he left a lot of unhappy people in his wake.

He’s probably not too connected to the ripple of fear that started from that blow-up. But the trust and safety that were damaged could take months even years to rebuild. Productivity will drop as people talk and rehash what happened, trying to process it all. Clearly, there are better ways he could have handled the situation.

I’m not saying you shouldn’t get frustrated or mad. You are human — it happens. But what you do with that anger is what matters most. Can you calm yourself and think of several ways to say what you need to constructively?

Here are three steps you can take right away to bring your team out of the grey zone:

Awareness is the first step. Then start with the one thing you can control: your own behavior. It’s worth it when you consider what you’ll gain as your team members emerge from the grey zone of unhappiness and can begin to see the light of day.