Yes, You Can Be Both Selfless And Competitive! 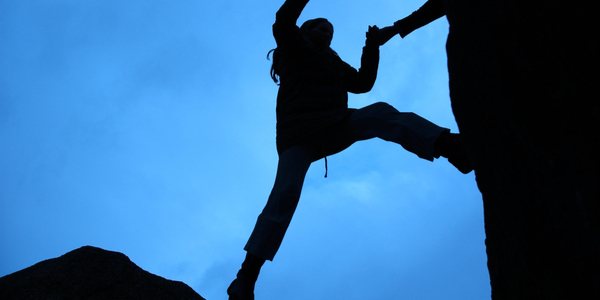 "It’s not just about you anymore, Dede."

These were the life-changing words that my business partner uttered to me in 2009. Our business was failing and I was about to pull the rip-cord and bail out. But I was only looking out for myself. She reminded me that we had team members and families who depended on our company. Closing the business wouldn’t be as easy as deciding I was going to be an independent consultant. I was going to have to grow up some more and learn how to serve others who had offered us their loyalty and trust as business leaders.

Jonathan Keyser, a commercial real estate broker and author of You Don’t Have to be Ruthless to Win, found himself being the worst version of himself at one point as well. “Lying and backstabbing was the norm for me,” he wrote. “Truth was not relevant. The only thing that mattered was this: Whatever needed to be said or done to get a client and get a deal done so I could get paid is what I did. Period. Lying became so normal that I forgot that I was even lying. I was just doing my job ‘being a broker,’ as all brokers do. I became numb to my actions and pushed the feelings of guilt deep down inside.”

Commercial real estate isn’t typically known for its “good guys.” Jonathan describes how co-workers fight, scratch and claw for themselves and ruthlessly grab every opportunity they can find. He tells of a commercial real estate agent whose son had gotten sick and needed help, so the agent asked his partner to take a meeting for him. The partner went into the meeting and influenced the client to hire him as the lead instead — and ended up with the larger commission.

Competition and ruthlessness are common in a 100% commission-based industry. But Jonathan wasn’t settling for common. He shares bravely in his book about how he clamored to get ahead in his job, mostly wanting to avoid the poverty that he had grown up with.

I had the opportunity to interview Jonathan recently, and here’s what he shared about selfless service.

Dede Henley: I assume your company operates with the principles of selfless service. What would your team say about you and working for you?

Jonathan Keyser: The cool thing about working at Keyser is that everybody is helping each other be more successful. It’s a huge differentiator in our business. Everyone is collaborating, no one is looking over their shoulders. We have a culture of service, with fulfillment and joy as outcomes. We are a mission-driven organization. We want people to selflessly serve each other. It’s a place where everyone is trying to get better.

DH: How do you reward collaboration and selfless service?

JK: The biggest reward is the act of selflessness itself. The people who are the most selfless at Keyser reap the most benefit and success. It’s not a direct, “Hey, you did a nice thing, so here’s a buck.” These people create long-term success through relationships. And long-term is what we focus on. We’re not talking about instant gratification with this methodology. I look for people who want to serve others and want to serve in commercial real estate — for people who want a better way to work. These people are most successful over the long term at Keyser. They see significantly higher financial results.

Selfless service is a model where, if you go all in, you will wake up one day and be stunned at how much success you’ve created in your life. But it has to be done with no expectation of immediate reward. It’s a long game.

DH: What’s the most important thing people need to know if they’re thinking of bringing selfless service to their workplaces?

JK: Selfless service needs to be authentic. It can’t be gamed. People have really good B.S. detectors. If you are doing something for someone and expecting them to do something for you, this won’t work.

DH: Can you share a story about when you chose to serve another over being ruthless?

JK: A number of years ago, we competed for a piece of business and came in second. Typically when that happens, and you’ve put hundreds of hours into the pursuit, you write off the person or the company that rejected you. We do the exact opposite. For me this means that this piece of business wasn’t for us at that time.

About six months later, I heard about a CFO job that I thought might be good for the person who rejected us. I called her and told her about it. She interviewed, got the job and was so grateful that I had thought to call her and tell her about the job. I didn’t write her off. There was nothing in this for me, personally. But she could see that I really do care about people. Some months later, she brought our company into work with her at the new company.

A big part of helping is determining what needs people have and listening for how you can help with those needs. We help others and then people want to help us back. It’s a wonderful synchronicity.

Three Tips to Getting Started with Selfless Service

Here are a few takeaways from what I’ve learned from my own experience as well as that conversation with Jonathan: